The tree is a local tourist attraction, as it is the only major tree growing in the area. The tree is visited by approximately 50,000 tourists every year and the tree often is damaged by graffiti carvings. It is also believed to be the site for cults practising ancient rites. Since October 2010, archaeologists have unearthed pottery and other artefacts in the vicinity of the tree, some of which may date back to the Dilmun civilisation.[citation needed]

Trees and shrubs of Prosopis genus are extremely well adapted to arid environments with one of the deepest known root systems.

The tree is mentioned in the movie L.A. Story.

May be the mystery status of the Tree of Life in Bahrain is somewhat exagerated - but this vivid, majestic mesquite tree looks magnificent in the harsh desert.

Most members of Prosopis genus are native to America and there have a common name - mesquites. Prosopis cineraria though is native to Asia.

These are sturdy, interesting shrubs and trees which are extremely well adapted to dry deserts. Mesquite trees can provide fine food (beans, floor), fragrant and sturdy wood and medicals and above all - they can bring life to desert. The roots of these thorny trees and shrubs host colonies of bacteria that can fix nitrogen. In a such way this plant helps to enrich the desert soil.

Prosopis trees have developed many interesting qualities to deal with dry climate and one is - extremely deep root system. Roots of one tree in this genus - Mexican Prosopis juliflora - might go up to 53 m deep!

Messenger from the Garden of Eden?

Tree miraculously has survived up to this day, it looks healthy and has fresh, green leaves. It grows on a small sand hill and is visible from far away. The tree certainly is lonely - without any other trees in sight, with smaller plants some distance from it.

The trunk of mesquite is protected with an intricate fence from wrought iron - unfortunately many people have left graffiti on its trunk. Unfortunately even some tour guides have proposes to make these writings to tourists. This is popular tourist destination with some 50 000 visitors coming here every year.

Many locals have attributed mysterious qualities to the Tree of Life. Many consider that it marks the true location of the Garden of Eden and often it is claimed that this is a mystery - where the tree gets water.

Closer look at maps shows the situation in a different light. Tree of Life is not entirely lonely. One smaller tree grows some 850 m to the north from the Tree of Life. Nearby are some more trees. When browsing through the map of Bahrain one can find some more lonely trees.

Next - the source of water also is not such a big mystery. The ground, where the tree grows, is just some 9 - 12 m above the sea level and groundwater level in this location is higher than the sea level. Not too far from the tree are seen ponds with water. Remember - roots of these trees might go even 53 m deep!

The air here often is humid - and mesquite is well adapted to gain the moisture from the air as well.

The teachings of the old mesquite

This does not decrease the value of the Tree of Life. This majestic, old mesquite tree tells a valuable story about a possibility of a better life in Bahrain.

First we can look into the past. The ancient Dilmun differed from the present day Bahrain. Back in those times Bahrain was a land rich with water, fields and farms, island had many small streams emanating from powerful springs. Dilmun was a significant exporter of agricultural goods. Throughout the island in the places where today is lifeless desert, can be found traces of ancient agriculture.

Today Bahrain is not green anymore. This can be attributed to the rising sea level, which step by step has eliminated freshwater from the island. But humans have some fault at this as well - without intense agriculture, grazing and - urbanization - Bahrain would be a different island. Unfortunately today the scarce groundwater resources in the country are increasingly polluted, the fragile desert ecosystem is literally viped away by the modern development.

Tree of Life though shows a way out of dead way. It tells - there are plants, which can grow here. If there would be many more such trees, groundwater level would rise step by step and the water would be cleaner. Instead of the lifeless ground there would form a soil.

Today the landscape around the tree is not beautiful - there are fences, oil fields and pipes, military installations. Tree of Life stands amidst all of this as a lonely beakon of hope.

See Tree of Life on the map of Bahrain!

Graffiti on the bark of Tree Of Life.
Rick's Images, Flickr, CC BY 2.0

Amphitheatre plan for Tree of Life 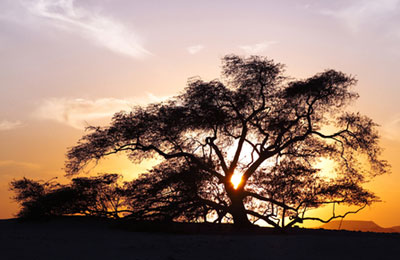 Extensive work featuring a spectacular amphitheatre overlooking the 400-year-old Tree of Life, one of Bahrain's most famous landmarks, is being planned, a report said.

The $786,800 project will include a viewing area, kiosks and tourist attractions, according to the report in our sister publication, the Gulf Daily News.

The scheme, which is being sponsored by Bapco, is scheduled to be completed by the end of the year, while its first phase will be finished this month.

"Work is on schedule and we are expected to finish the first phase, which consists of setting up the basic infrastructure later this month," said a representative of contractors Bukhowa Contracting.

Contracts have still not been awarded for the project's second phase which will consist of finalising the beautification process.

The project would be set up in a strategic location, which would also give a clear view of an excavation site near the tree.

In October 2010, archaeologists unearthed ancient ruins of a 500-year-old fort at the site of the Tree of Life.

Excavations turned up artefacts and pottery and the tree is located at the centre of the fortification, but the ruins have since been covered with sand.

The development scheme was launched in October last year by the Culture Ministry, in association with the Southern Governorate and Public Commission for the Protection of Marine Resources, Environment and Wildlife.

It followed directives by His Royal Highness Prime Minister Prince Khalifa bin Salman Al Khalifa who instructed authorities to turn the place into a tourism attraction and promote Bahrain's cultural, heritage and tourism.

Another official supervising the project said the entire area would have a fresh look after the project is completed.

"There are plans to make this area truly attractive for tourists to come all year round," he said. "The Culture Ministry is taking pains to bring the area to life."

He said another project to preserve the archaeological history in the area is also underway.

"That will also be completed in the months to come," he said.

Meanwhile, a Bapco representative said the company was committed to Bahrain's development, particularly preserving its rich history and culture. "The Bapco sponsorship is a step in that direction," he said.

The tree stands in the middle of the desert and its source of water has been a mystery for experts.

A soil and tree ring analysis conducted more than 20 years ago by historian Dr Ali Akbar Bushiri concluded that the Tree of Life was an Acacia planted in 1582 AD.

It was fenced off in 2007 after being targeted by vandals.

The tree still bears marks of graffiti and small holes at the base of its trunk, as well as cracks in some of its branches.

Area councillor Bader Al Dossary earlier said the tree was scarred by messages carved into its branches and trunk, as well as charred by worshippers mainly from the Philippines, India and Pakistan lighting fires around it during cult rituals.

A national committee for the preservation of historical and archaeological sites was supposed to be established in 2007 when 40 environmentalists, historians, archaeologists and scientists met at the Tree of Life.

The gathering took place after it emerged the tree's trunk and roots had been burned. – TradeArabia News Service